What makes a Poet Laureate?

Is it a lifetime of service, enthusiasm for your craft? A prolific output of quality work?

A willingness to be a part of something beyond yourself?

Lily Peter (1891-1991) was the Poet Laureate of Arkansas from 1971 until her death in 1991. She was born in rural eastern Arkansas to a farming family, descendents of German/Austrian immigrants who had traveled the length of the American landscape to eventually settle in the harsh Mississippi River delta. Lily was the oldest of nine children of whom only five survived into adulthood. As the eldest, she had responsibility put on her. It is likely that Lily developed a strong sense of herself through schooling and a desire to learn. She was educated at home until her mother and father could no longer keep up with her eagerness to learn; they sent her to area schools. Eventually, she was sent to live with relatives in Ohio in order to receive a proper education. There was recognition by her parents that education was the way to a solid future and it was evident during this time that there were a shortage of qualified teachers in rural Arkansas. While Lily was away in Ohio, her father died in a farming accident. Lily was told not to return for the funeral because she was still in school and wouldn’t be able to return in time to finish the year. It is no surprise that after graduation, Lily chose to enter the teaching profession and returned home to help support the family. She helped educate her siblings, took care of her frail mother, helped run the farm…she took on the leadership role of the family. 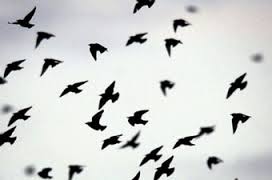 Blackbirds
banking into the wind against a lilac winter sky
fill me with wonder and a sense of doom.
How little time have they and I
here to enoy the swirling wintry bloom
of the thin petaled air!

Wild words
crowd to my lips and are not spoken.
Consciousness, the shared treasure we may not
keep,
we spend our breath in destroying, and when it is
broken
and lost in the last sleep,
who will there be to care?

Her imaginative nature was evident in her childhood. In her biography*, it states that when she turned 5, she was convinced that she would be grown up and wanted to clean the barn by herself. When she woke that day and discovered she had not grown, she was inconsolable. She cried all day. It was this emotional attachment to her desires/imagination that shaped Lily’s future. It was clear that as an adult, Lily became very self-reliant. She continued to seek educational opportunities and ways to experience the world. She never married, though she had several suitors and was even engaged at one point.

Lily Peter began writing as a child, as playing with words seemed to satisfy her need for inventiveness. Most of her early writings consisted of journal entries, observations about community life in rural Arkansas, bits of light verse, and correspondence, all of which is contained in the archives at the University of Central Arkansas. Later in life, her poetry held a more somber tone. For example, “The Green Linen of Summer,” shown below is about protection of yourself against difficulties that are inevitable in life; I think it reflects her practical view of the world, based on her experiences with loss (death of her father and mother) and struggles to maintain her family’s farm during floods, epidemics, etc.

The Green Linen of Summer**

I wrap my thoughts in the green linen of summer
Against the terror of the dragon wind,
And pray that the linen may not too soon be thread-
bare,
Its texture thinned.

For by and by I know will come November
With its wintry blast;
And what is there to keep body and soul from
freezing,
If the linen do not last?

She only published four volumes of poetry*** in her lifetime. Yet, this didn’t seem to define her. She was much more to the state of Arkansas than a published poet. She was a teacher for 40 years, a successful cotton farmer, an environmental advocate, an accomplished violinist (studied at Columbia and Julliard), a writer, and a philanthropist. She had supported musical causes throughout her adult life, mostly on behalf of the Moravian Church. One of her ancestors was the composer John Frederick Peter, who was influencial in early American music. She underwrote the cost of bringing the Philadelphia Philharmonic Orchestra to Little Rock, Arkansas in 1969 by putting a mortgage on her plantation. She did this because she wanted “the people of Arkansas to be exposed to good music, to have a chance I didn’t have.”

Aftersong Instead of a Coda**

To leave this music,
to lie forever in the moonless
dark, where is no peach blossom, cloud or willow,
will be hard for me, who have loved this swampland always.

But in the dark I shall somewhere find Persephone,
and she will take my hand and I will say, “Please
show me the way of the journey back to the sunlight!”
Persephone has made it countless times and would
know!

And some spring morning you will see us running
up the slope
of the thickety bayou with violets in our hands.

And suddenly
I shall be translated to music: a prelude
of April grass; the improvisation of the bacchanal
muscadine; a transposition of chlorophyll,
the plangent chord that evokes the wild elder and
hawthorne
from the numbered bass of the atoms, the rhythm
of light.

Lily Peter lived to see 100 years. One of her more well-known poems is “Note Left on a Doorstep,” which gives us her view of the beauty of life and how it overcomes death.

Tell Death I am not here,

When he comes for me.

He will find me standing yonder

Under a quince tree,

With violets in my hair

Jasmine in my hand,

Looking for the last time

At the lovely land,

Feeling for the last time

The wind in my face,

Watching the clouds go over

In their tall grace.

Death may have the body

In the room at the head of the stair,

But I shall be under a quince tree

With violets in my hair.

**************
* A Nude Singularity, Lily Peter of Arkansas, AnnieLaura M. Jaggers, UCA Press, 1993. The title is derived from the astronomer’s terminology of an unexplainable phenomenon. This phenomenon being how Lily Peter became all the things she did, in spite of all the odds against her.

**Lily Peter,
from “The Green Linen of Summer and other Poems”
copyright 1964 by Robert Moore Allen
(out of print)

***Her published works consist of a collection of published poems entitled “The Green Linen of Summer and other poems,” copyright 1964 Robert Moore Allen ; “The Sea Dream of the Mississippi” (another collection of poems), “In the Beginning, Myths of The Western World retold in poetry and prose,” The University of Arkansas Press, 1983; “The Great Riding, The Story of Desoto in America,” originally published in 1966 by Robert Moore Allen (republished by the University of Arkansas Press in 1983).